Bullied Quaden Bayles’ family REJECT the $700,000 raised from a fundraiser set up by US comedian for a trip to Disneyland and ask for it to go to grassroots charities instead

Quaden Bayles’ family have declined a trip to Disneyland, pledging to donate the $700,000 raised for the youngster to charity.

The nine-year-old, who has dwarfism, became a global sensation after his mother started an anti-bullying campaign.

It began with a viral video of the youngster saying he wanted to die after being bullied at school.

An online fundraiser, ‘Let’s send a wonderful kid to Disneyland’, was soon set up by US comedian Brad Williams, who also has dwarfism.

Mother shares footage of her son breaking down after being bullied

But on Thursday afternoon, his family stunned fans by turning down the trip – saying they would rather the money be given to charity to help combat bullying and suicide.

Quaden’s mother Yarraka shared the distressing video which sparked the outpouring of support after picking her son up from school earlier this month.

‘What kid wouldn’t want to go to Disneyland, especially if you have lived Quaden’s life,’ his aunt Mundanara told NITV News.

‘But my sister said “you know what, let’s get back to the real issue”. This little fella has been bullied. How many suicides, black or white, in our society have happened due to bullying.

‘We want the money to go to community organisations that really need it. They know what the money should be spent on.

‘So as much as we want to go to Disneyland, I think our community would far off benefit from that.’

The fundraiser, launched just one week ago, aimed to show Quaden he ‘is a wonderful human being who deserves joy’.

Williams wrote: ‘9-year-old Quaden is an amazing boy from Australia with dwarfism.

‘One day when his mother picked him up from school, she found Quaden in hysterics. 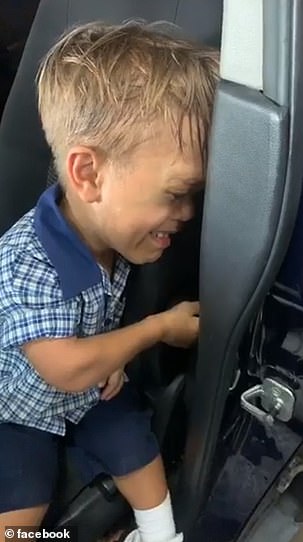 ‘Quaden was being bullied so horribly in school, that he just could not take it anymore.

‘His mother filmed his tearful outcry and put it on Facebook to let people know the effect that bullying can have.

‘The bullying was so severe, in the video Quaden can be heard saying “Give me a knife—I want to kill myself.”

‘I’m setting up this GoFundMe to let Quaden know that bullying will not be tolerated, and that he is a wonderful human being who deserves joy.

‘I want to fly Quaden and his mother to America, get them a nice hotel, and bring them to Disneyland.’

The family explained it was still considering where to donate the cash, but had earmarked Dwarfism Awareness Australia and the Balunu Healing Foundation.

Ms Bayles explained that at the Murri School in Brisbane, where she is on the board, seven children have committed suicide in the last ten years.

They are now in discussions with Mr Williams, as according to GoFundMe rules, donated funds must be ‘used solely for the purpose stated’.

This means it is not easy to divert the money elsewhere, with the rules stating ‘under no circumstances may you use the funds for any other purpose’.

The actor had written that ‘after all the flights, hotel, tickets and food is paid for, any excess money will be donated to anti-bullying/anti-abuse charities.’

The generous donations were just some of the outpouring of support Quaden received from around the world.

He even received a VIP makeover, getting a free haircut at a top salon, and a wardrobe overhaul from Australian brand Culture Kings.

Quaden has been invited on a number of global trips and experiences, including courtside tickets to an NBA game and an offer to attend a mixed martial arts masterclass in Singapore.

After learning that Quaden was an NBA fan, the Houston Rockets basketball team invited him to sit court side at one of their games in Texas.

‘Cool shirt, Quaden! We’re on your team. We’d like to invite you to Houston to come to a game when you visit the U.S,’ the team posted, along with a photo of Quaden wearing a Houston Rockets t-shirt.

Martial arts champion and ONE Championship founder Chatri Sityodtong, 49, also offered to fly Quaden and his family on an all-expenses paid trip to Singapore.

28 Things Literally Everyone Experienced As A Kid But Never, Ever...

Nightlight lets you sleep under a nebula of stars

6 surprising benefits of having s.e.x regularly

28 Things Literally Everyone Experienced As A Kid But Never, Ever...

Kind Woman Caught On Camera Giving Her Own Scarf To A...

The best places to travel in Peru: Top 6 tourist attractions...

The teacher suspended for being gay won a big settlement. She...