A nine-year-old boy who went viral after being bullied for his dwarfism has been invited on a whirlwind round-the-world by celebrities and sports stars after $466,$700,000 was raised for him.

Quaden Bayles, from Brisbane, made international headlines last week when his mother Yarraka filmed him saying he wanted to die after being bullied at school.

The heartbreaking footage prompted a number of celebrities to publicly defend the schoolboy, including Hugh Jackman, Johnathan Thurston, Cardi B and Piers Morgan.

Quaden has since been invited on a number of global trips and experiences, including Disneyland in California, court side tickets to an NBA game and an offer to attend a mixed martial arts masterclass in Singapore.

American Comedian Brad Williams, who also has dwarfism, raised more than $700,000 (US$465,899), and counting, to send Quaden and his mother to Disneyland. 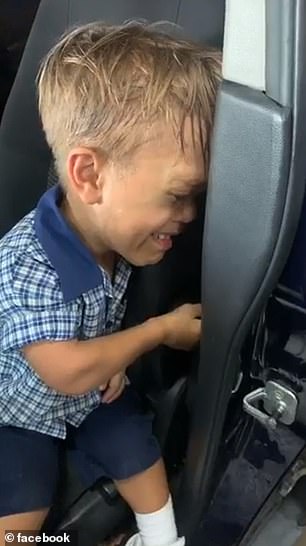 ‘I’m setting up this GoFundMe to let Quaden know that bullying will not be tolerated, and that he is a wonderful human being who deserves joy,’ Williams wrote on the GoFundMe page.

‘I want to fly Quaden and his mother to America, get them a nice hotel, and bring them to Disneyland.’

All excess funds raised will be donated to anti-bullying charities.

After learning that Quaden was an NBA fan, the Houston Rockets basketball team invited him to sit court side one of their games in Texas.

‘Cool shirt, Quaden! We’re on your team. We’d like to invite you to Houston to come to a game when you visit the U.S,’ the team posted, along with a photo of Quaden wearing a Houston Rockets t-shirt.

Martial arts champion and ONE Championship founder Chatri Sityodtong, 49, also offered to fly Quaden and his family on an all-expenses paid trip to Singapore.

Sityodtong praised Quaden’s strength and invited him to be taught martial arts in a video posted online on Friday.

The martial arts champion also promised to teach Quaden himself.

‘I just wanted to share an update on Quaden Bayles. I just spoke to his amazing mom, Yarraka, over the phone,’ Sityodtong tweeted.

‘She has graciously accepted my invitation to come to Singapore for an all-expenses-paid vacation so Quaden can learn martial arts at EVOLVE’.

Quaden’s mother Yarraka shared the distressing video which sparked the outpouring of support after picking her son up from school on Wednesday.

The schoolboy, who has achondroplasia – the most common type of dwarfism – told his mother: ‘Give me a rope, I want to kill myself.’

In the video, which has been viewed more than three million times, Quaden also said: ‘I just want to stab myself in the heart… I want someone to kill me.’

Quaden also scratched at his neck and said: ‘I want to die… I want to scratch myself.

The Murri boy led out the Indigenous All-Stars NRL team on Saturday night on the Gold Coast.

Quaden was invited to walk onto the pitch at Cbus Super Stadium as they took on the Maori All-Stars.

The crowd erupted in cheers as Quaden entered the field hand-in-hand with captain Joel Thompson at about 8pm.

He was dressed in an All-Stars jersey, donned black noise-cancelling headphones and clung to the match ball as he strode into the middle of the pitch.

Quaden stopped at the half-way mark to pose for a pre-match photo with a referee, Thompson and Maori All-Stars co-captain Adam Blair.

Before entering the field, the nine-year-old gave high-fives to the squad members of the Maori All-Stars.

Quaden has also received an outpouring of support online from other celebrities.

Hugh Jackman, 51, told the schoolboy that he’ll always be his friend.

The Les Misérables star also sent a powerful message to Quaden’s bullies, saying that ‘life is hard enough’ without people going out of their way to upset others.

‘Quaden, you are stronger than you know, mate,’ Hugh said in a video shared with his 14 million Twitter followers.

He added: ‘And no matter what, you’ve got a friend in me.’

US president Donald Trump’s son Eric has also spoken out about the viral video of Quaden crying to his mother.

‘This is absolutely heartbreaking. God bless this little boy… Quaden – we are all with you! Stay strong!,’ Eric Trump wrote on Twitter on Friday.

‘Poor little guy. Hope he gets all the support he needs and deserves,’ the shock jock tweeted.

Australian world champion boxer Billy Dib meanwhile revealed he had spoken to Quaden by FaceTime video call and offered to give him some free training sessions.

Dib shared a picture of the youngster wearing a Boston Celtics basketball jersey on Instagram alongside the words ‘we stand with Quaden’.

‘This is one of the hardest video I’ve watched,’ he wrote.

Rapper Cardi B also shared an impassioned video to social media, defending  Quaden after trolls accused him of secretly being an adult.

A conspiracy theory was spread that the nine-year-old schoolboy is actually an 18-year-old man.

‘Everyone keeps saying he’s lying about his age’, the outspoken rapper told her 59.3 million Instagram followers.

‘I really don’t think he’s lying about his age.

‘And just because there’s videos of him flossing money and acting all gangster, and acting all cool and everything, it doesn’t mean that kids do not pick on him.

The accuser also pointed to a photo of Quaden at an 18th birthday party, saying the celebrations were for him.

His mother hit out at the claims as they gathered pace on social media, sharing a post from someone who said they knew Quaden from before his viral video.

One Instagram photo of the nine-year-old had meanwhile been subtly cropped by his accusers showing him appearing to drink wine with his mother. 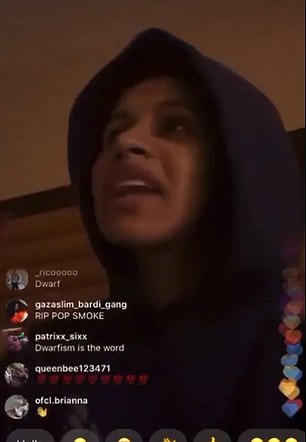 In fact, a bottle of Appletiser was sitting on a table next to him – proving his beverage was sparkling apple juice.

The young boy’s modelling success and strong Instagram following has also raised doubts about his age.

On Saturday, both his and his mother’s profiles on the platform were deleted.

His profile on Star Now says he is eight-years-old though, with beginner modelling experience.

Quaden has also appeared on television as a four-year-old, sitting on his mother’s lap playing with toys in an interview with Studio 10.

Looking further back, Yarraka Bayles shared a picture of her son’s sixth birthday cake in December 2016 and in 2010 celebrated Quaden turning 16 days old.

Why Quaden IS a nine-year-old

2. His modelling profile, which may not have been updated, says he is eight-years-old

3. He appeared on TV toothless and playing with toys as a four-year-old

4. A photo of him purportedly drinking alcohol has been cropped to remove the Appletiser beside him

Husband creates ‘bike chair’ so he can take wife with Alzheimer’s...

Jell-O Shot Jenga exists and it will get the party started...

The Internet Loves Wiley, The Dalmation With A Heart On His...

10-Year-Old Ends His Life After Being Bullied For His Race And...

25 Korean Movies MUST WATCH If You Loved “Parasite”

This Village Without Roads Is Straight Out Of A Fairytale Book

22 Pictures That Are Too Real If You Have An Overactive...